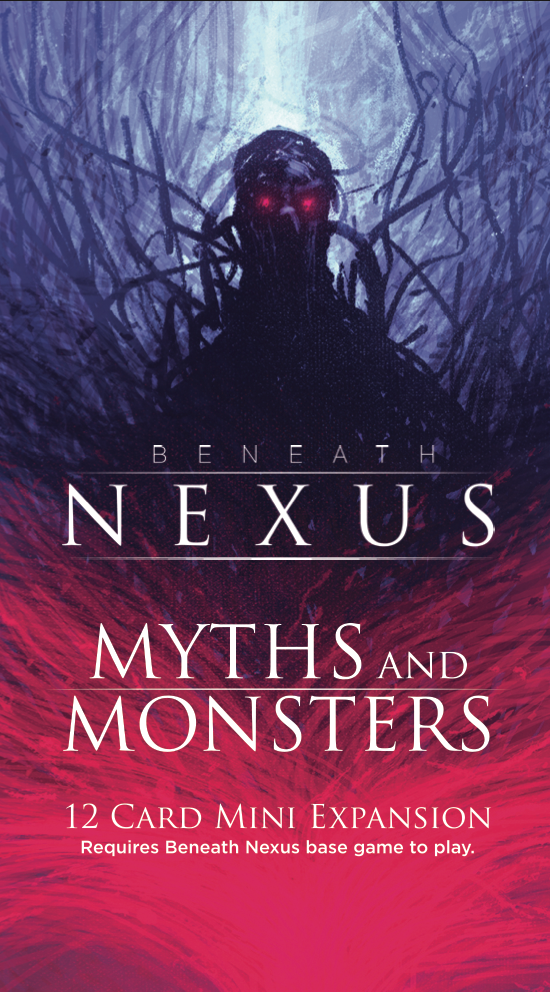 The Myths and Monsters Mini Expansion introduces 7 new cards to Beneath Nexus to expand the base game, 5 new monsters, 1 new Relic, and 1 new Cursed Relic.

Dy-Buk - Souls of the dead that lurk in the shadows of Nexus. They have long forgotten who they are and spend their days in fear, hiding from the more powerful denizens of Nexus.

Amano-Jaku - Evil spirits that have been drawn to the dark power of the Ether Well. The power of the Blight has turned them into the embodiement of curses and ill intent.

Aketeko - Fiendish little monsters that appear to be an animated hand of a red ape. They graft themselves on to corpses and use the stolen bodies to harrass unsuspecting heroes.

Dark Construct - Once powerful battery contructs that helped scholars and mages in their research into ether, the Dark Constructs now serve as vessels for spreading the power of blighted ether.

Kappa-Hama - Wise men of Bara-hama that came to Nexus to cleanse it, their faith in the Holy Fire was not enough to protect them from the corruption of the Blight.

Muramasa - The greatest sword ever made by the greatest swordsmith who ever lived, it was forge with spite and ill intent. Able to rend any foe, it deals as much harm to it's wielder as it's victims.

Masamune - Made to atone for the creation of the Muramasa, the Masamune was made to defend, not attack. Every stoke channels healing power into the allies of the wielder.

5 new Monster cards (2 copies of each)

*Requires Beneath Nexus to play.

Save this product for later